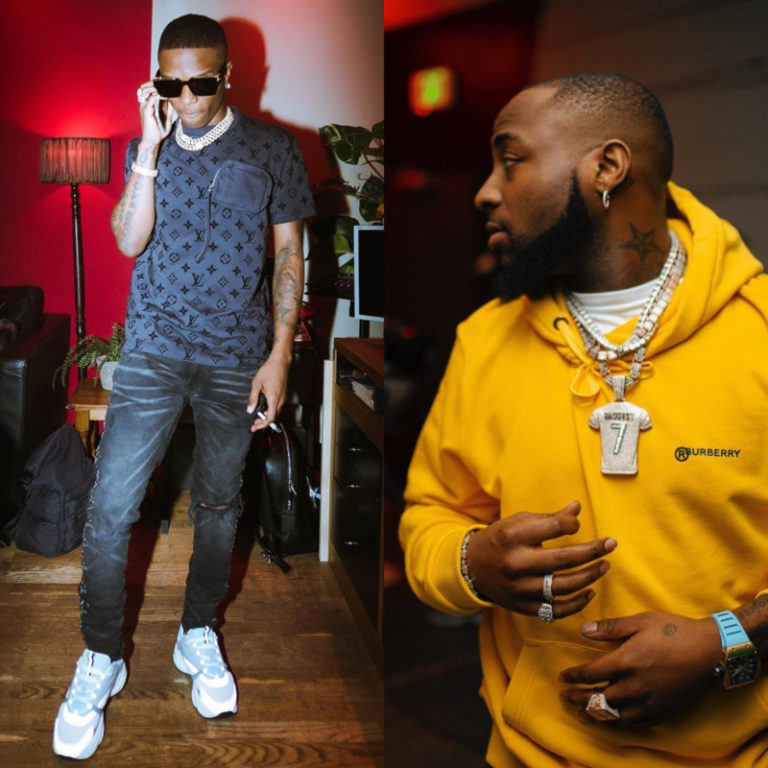 The Wizkid versus Davido is one topic that will never leave the lips of music lovers. For years, the two singers have been compared nonstop on social media and it has become tiring.

The new argument is that Wizkid might actually be richer than Davido. Over the years, Wizkid has made himself almost invisible to the eye of the public. The singer uses social media like a toddler with many toys.  Once he’s bored with one, he switches to something much more fun. Social media has now become a tool the singer uses only to connect with his fans and make announcements.

This has made it almost impossible for everyone to know what goes on in his everyday life- no one knows how rich this man is. With the help of his large fan base who have numerous social media accounts especially to share his achievements, people have been given a glimpse of how much his worth might be and this gave Wizkid FC the chance to compare Starboy with The Baddest, Davido (OBO). So how might Wizkid be richer? Let’s discuss below.

Asides being one of the most streamed artistes in the continent, the singer has made himself a very hot commodity for international brands. Brands know that he is the best when it comes to deals like this. The Starboy name alone is enough to rack up millions within hours.

At the beginning of 2019. he literally did his fans “Strong thing” by talking a short hiatus at the beginning of the year. He didn’t make a comeback till April after the release of the smash hit “Low”. During that period fans were only curious about what he was up to and several speculations about the reason for the singer’s long absence from the music scene became the number 1 topic on social media.

Well, despite not revealing much at the time of his comeback, Wizkid was apparently chasing the bag. It is also worthy to note that the singer has always been making money moves but it appears the deals keeps on getting bigger. The singer was full of surprises and took his time in disclosing them one after the other.

Now many of you might again argue that the singer is not the only artiste with endorsements. Very correct but that of Wizkid is packed with big international deals, not the regular local or even international ones others sign. It’s much bigger than someone’s entire career. Now let’s take a look at some of his endorsements

In 2018, Wizkid’s fan base, Wizkid FC became the first African music fan base to have an official jersey, as the singer signed a partnership deal with Nike to officially release Starboy jerseys. The deal was said to worth 3.75 Million Dollars. Of course, the entire collection got sold out and till now it remains the most purchased jersey for a fanbase. Even those who made copies of the jersey (the mass production) can testify to cashing out from the business. The Starboy also cashed out from the Unveiling of Nigeria’s Official Jersey (New Kit) made for the 2018 World Cup.

Same year 2018, Wizkid met with American singer and business mogul, P.Diddy and got signed as Ciroc’s Brand Ambassador officially. His Deal with Ciroc is said to worth Millions of Dollars which still stays undisclosed.

In  2019, the singer joined UBA as their brand ambassador for a deal worth over $3 Million Dollars (approx. N1,080,000,000). According to reports, it is the biggest endorsement deal in African Music. It covers adverts, performances, and partnerships and is also Nigeria’s first N1 billion endorsement deal. It was also reported that the deal even costs more than the said amount and Wizkid as usual refused to speak on the topic.

This 2020, While all acts/celebrities were complaining about the inability to secure the bag due to the Global Pandemic (COVID-19) Wizkid bagged the biggest mobile endorsement deal ever as he signs with Tecno mobile. The price of the deal is yet to be disclosed but it is sure that he would be receiving nothing less than any of his previous deals. Even Tecno has recorded massive sales for a phone that is yet to hit the market and the singer further caused chaos when his first tweet after signing the deal was from his new Android phone.

Wizkid’s currently securing big bags with more announcements on the way while Davido’s 2020 Big Tours that taking way ahead of Wiz are on hold due to the Global Pandemic. David’s music source now are just the Streams (His Hit songs & ‘A Good Time‘ album).

Presently the Starboy resides in the UK (United Kingdom) cashing out big and living a low life with no entourage/Geng tapping daily from his Juice. Well we all know Davido as the heavily spender, a man with a very large heart (Cheerful Giver, the one that goes all out to put smile on people’s faces) and Entourage. Recently he made the news for the house he brought for his staffs on the Island at the good heart of Lagos, Nigeria and currently making more relief plans to help Nigerian with the Lockdown.

The Maths simple (+,-) Wizkid makes more from Music and spends less, While Davido spends almost what he makes if not even more. Which shows the fact that Wizkid Might just Be Richer than Davido

Do You Agree With Writer On This?