CEO of The Chrome Group, owner of the oldest and most popular market plaza in Anambra state, plus lots of business partnership and investments and a government contractor.
Sir Emeka C. Offor started the CG Foundation as an NGO in the mid-nineties, as a vehicle for his philanthropic activities.
The Foundation seeks to alleviate the suffering of the less privileged in society through philanthropy, and focuses primarily on giving support and hope to those in neeThe Son of a Policeman who was born in Kafanchan braved the odds to become the successful businessman that he is today. He has dealt poverty a great blow and has tried his best to ensure that the pangs of poverty would not hinder the dreamof the average Nigerian child today. Recently he gave a whooping 1 million dollars in addition to the initial 250 thousand dollars he donated to the Rotary Foundation polio plus programme, for the eradication of polio in Nigerian.
Prince Arthur Eze, – From Ukpo, Dunukofia LGA, Anambra State 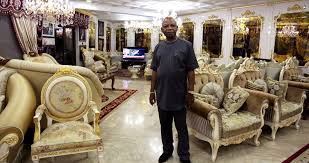 A Nigerian oil tycoon, is considered the eighth richest person in Africa with a net worth of more than $5.8 billion. His immense wealth and influence in the oil industry are the result of canny business practices, and he has also become known for his deep connections to Nigerian politics
Eze attended secondary school in Nkwere, Nigeria. He studied chemical and mechanical engineering at California State University, Long Beach from 1974 to 1978.
Arthur Eze is a Founder, Owner and serves as Chairman of Atlas Petroleum International Ltd, which has assets in Nigeria, Liberia, Guinea, and the Gambia. Founded in 1991.
In 2010 Eze made $200M selling oil blocks in Liberia.
He recently bought himself a brand new Falcon airplane and it was delivered to him at Akanu Ibiam International Airport, Enugu State
Ifeanyi Ubah – From Otolo, Nnewi, Anambra State
The CEO of capital oil, one of Nigeria’s largest distributor of petroleum products, accounting for 30 percent of daily petroleum related needs of Nigerians. Dr Patrick Ifeanyi Ubah started out from a very humble beginning working as a trade apprentice, where he gained business knowledge on sales and importation, exportation of tyres to Countries of Africa, such as Ghana, Liberia, Democratic Republic of Congo (DRC), Sierra leone. At age 19, Ifeanyi Ubah was already making his first million naira as a car Tyre dealer and auto spare parts dealer.In 2001 Ifeanyi Ubah founded Capital Oil & Gas Nigeria limited which was to involve in retailing of Petroleum products and haulage transportation business.
Patrick Ifeanyi Ubah was born September 3, 1971 to the humble, working class family of Mr. & Mrs. Alphonsus Ubah of Umuanuka.
Dr. Innocent Ifediaso Chukwuma, – From Uru-Umudim Nnewi, Anambra State
Popularly known as Innoson is the Group Chairman and Chief Executive Officer of Innoson Vehicles Manufacturing Co. Ltd, the first indigenous vehicle manufacturing plant in Nigeria. He was born in 1961 in Umudim, Nnewi,in Anambra State. He is the last of six children born to Mr. and Mrs.
Chukwuma Mojekwu. After his education, he started trading in spare parts under the name Innoson Nigeria Ltd in 1981. His company is next after Leventis and Boulos Enterprises in assembling branded motorcycles in the country.
Innoson has won awards both locally and internationally

Dr. Cosmas Madua­buchukwu Maduka, Chairman, Chief Executive Officer of Coscharis Group of Companies
Born into the family of, late Pa Peter and Madam Rose on December 24, 1958, he lost his father at the age of four, so the opportunity of acquiring formal education eluded him. After the death of his father, he went through hard times, but with perseverance and dedication, he is today, one of the leading chief executive officers in Nigeria. His uncle sacked him when he was an apprentice trader for attending a church programme, yet that was not the end of the road for him and never despaired and trudged on, and believing that tomorrow holds much promises for him. Today, his name is written in bold letters among corporate leaders in Nigeria.
Dr. Obinna Uzoh, – From Umunnamehi, in Ihiala, Anambra State
Lawyer, politician, businessman and philanthropist is former gubernatorial aspirant of the Peoples Democratic Party (PDP) in Anambra State.
He is the Chairman/CEO of GOCUZ Group of Companies, Uzoh, holds a PhD in Economics. Born on March 17 1963.
In his words…, “I started a business with a paltry sum, an amount, which I immediately dedicated to God through the intermediary of the Blessed Virgin Mary. This business, which began as a mustard seed, has today grown into a conglomerate of many companies, Gocuz Engineering, Gocuz Oil Services, Gocuz Construction, Gocuz Farm, Gocuz Chambers and Gocuz Finance and Security. While doing business, I was able to pursue an academic career that earned me B.Sc in Business Administration, M.Sc. in Marketing and LLB and BL in Law from the Nigerian Law School, and later Ph.D. in Economics. In addition, I have earned honorary doctorate degrees from the Madonna University, Okija and the Bradley University in the United State of America”

Dr Nnamdi Emmanuel Uba (Andy) was born on December 14, 1958 in Enugu, Enugu State, to the family of Mr & Mrs Philip Uba.
Dr Uba who had furthered his studies at the California State University later proceed to Buxton University in the United Kingdom where he earned a Doctor degree in Bio-Sciences in 1996.
He lived and worked most of his professional life in the United States.
Between 1985 and 1992 he worked for the Golden State Mutual Insurance of California. With his team, he established a chain of health clinics in different parts of United States. His duties involve conducting evaluations for the United States government on workers’ compensation claims. However, Dr Uba maintained contact with situations in Nigeria and that accounts for his interest in philanthropic and developments projects he carried out in Nigeria soon after his return.

A Nigerian notable advance-fee fraud artist and former Director of Union Bank of Nigeria,.[1] He is most famous for successfully defrauding a Brazilian man, Mr. Nelson Sakaguchi, a Director at Brazil’s Banco Noroestebased in Sao Paulo, of $242 million, $191 million in cash and the remainder in the form of outstanding interest,[3]between 1995 and 1998. His accomplices were Emmanuel Ofolue, Nzeribe Okoli, and Obum Osakwe, along with the husband and wife duo, Christian Ikechukwu Anajemba and Amaka Anajemba, with Mr. Anajemba later being assassinated. After Nick Leeson’s trading losses at Barings Bank, and the looting of the Iraqi Central Bank by Qusay Hussein, the crime was the largest in banking history.

Is Annie Idibia expecting her 3rd child for 2face? Nigerians thinks so