Some wore shirts with an image of President Trump as the Monopoly mascot hauling a bag of money. Others taunted the president with signs that said they would show him their taxes, if he showed them his. And in front of a few thousand people on the lawn of the U.S. Capitol there was an oversized inflatable chicken with hair resembling Trump’s, suggesting the president is “too chicken” to release his taxes to the public.
From Seattle to the District, protesters gathered in cities throughout the country Saturday calling on Trump to release his personal tax returns as part of a nationwide Tax March. The protest falls on the country’s traditionally recognized deadline to file taxes, April 15.
In all, dozens of protests occurred throughout the country. The main march unfolded in the nation’s capital, where protesters gathered for a rally in front of the Capitol and then marched west along Pennsylvania Avenue. In South Florida, activists marched to Trump’s Mar-a-Lago resort, where the president is staying this weekend. Thousands more gathered at a large march in New York City, where activists, comedians and a state senator spoke. Many of the protests featured an inflatable chicken, a mascot of sorts for the march.

Presidents are not required to release their tax returns but have done so voluntarily dating to the 1970s. Activists and others say it is the only way to be fully open about any potential conflicts of interest.
In the nation’s capital, the crowd was mostly filled with locals and Spring Break tourists, some of whom purposely planned their trips to coincide with the march.
C.J. Ingram, a D.C. resident in her 50s who works in a funeral home, attended the march, her first protest during Trump’s presidency. 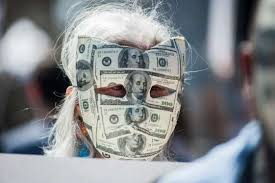 “I’m really mad because he made Barack Obama produce his birth certificate, and he’s not even producing his tax returns,” Ingram said. “Come on, really? What are you hiding?”
Trump has refused to release his tax returns, stating that he has been under audit. Asked for comment Thursday on the Tax March, the White House referred to comments earlier this week from press secretary Sean Spicer, who repeated that Trump is under an IRS audit, but indicated the president has been transparent with his finances.
The non-profit, Electronic Privacy Information Center filed suit in D.C. federal court Saturday over Trump’s tax returns, arguing there is a provision in IRS regulations that allows their release.
During the march in the District, the lineup of speakers included Sen. Ron Wyden (D-Ore.), Rep. Maxine Waters (D-Calif.) and Rep. Jamie B. Raskin (D-Md.) and others. The speakers derided the president, and called on him to act ethically and read the Constitution.
“Releasing your tax returns is lowest ethical bar for a president,” Wyden said. “And we’re going to make sure he clears that hurdle.”
Raskin suggested Trump was acting more like a king than an elected president.

“In America, no one is above the law, and all of us are subject to it,” the Maryland congressman said. “If you don’t release your taxes, we have no way of knowing if you are putting America first, or Donald Trump first.”
Tom Kelleher, 64, was visiting from California and carried a sign pointing out that even Nixon, who resigned the presidency in disgrace, released his taxes. Other signs suggested that the president may be refusing to release his taxes because it would link him to Russia.
As they marched, some in the crowd chanted “Hey, Hey we want to see your Schedule A” — a reference to a tax form used to itemize deductions.
Jennifer Taub, a professor at Vermont Law School, said the purpose of the march is also call on lawmakers to pass tax reforms that don’t only benefit the richest Americans. And, of course, she said she hopes citizens can compel the president to release his taxes to ensure he has no conflicts of interest.
“I do care about his taxes. I care about transparency and conflict of interest,” Taub said in an interview last week. “I think it’s important for us, we the people, to express First Amendment rights and say we want to see them.”

We WhatsApp technology on int’l radar over terror attack-Britain