Libya coach Adel Amrouche has accused players of the Super Eagles of Nigeria of using Juju ahead of the 2019 African Cup of Nations (AFCON) qualifiers between the two countries.

Amrouche gave his remarks about the Super Eagles after his side played out a goalless draw against the Bafana Bafana of South Africa in their second group game of the qualification series.

The result meant that Libya are on top of group E with four points same as South Africa but with a better goal difference while the Super Eagles are not far behind with three points.

In his press conference after the encounter, Amrouche revealed his admiration for his opponents and stated that they are tougher than the Super Eagles.

In a viral video clip upload to Twitter, Amrouche suggested that the Bafana Bafana have better players that Nigeria and their upcoming clash.

He said, “Believe me, i prefer play Nigeria than Bafana Bafana because i have this experience to play against Nigeria.

“For me, Bafana they have fantastic players and its not easy to play Bafana Bafana,”

He further went on to accuse players of the Super Eagles of using juju known as witchcraft.

“They believe on juju too much, and we believe on God. It’s not easy to play in South Africa.” 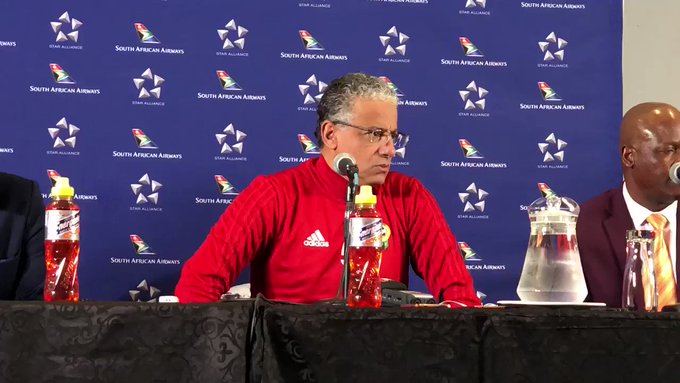 “Believe me, I would rather play Nigeria than Bafana… If Nigeria want to play both games there, that’s ok.”

Libya’s Adel Amrouche says that South Africa is a tougher game – for him – to prepare for than the Super Eagles.