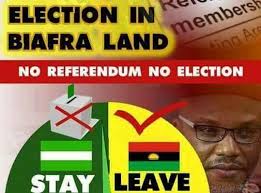 The Indigenous People of Biafra (IPOB) has directed people in Anambra state to observe a curfew between 5pm November 17 to 5pm November 18 to avoid being attacked by thugs during the gubernatorial election in the state.

The spokesperson for the group, Emma Powerful, in a statement on Thursday, October 19, alleged that the federal government was working in hand with some governors of APC and some other leaders from the zone to attack and kill people in the state during the poll.

Powerful alleged that intelligence report had exposed an alleged plot by the government to stage crisis and violence during the election in the name of IPOB and use the chaos to unleash harm on unsuspecting people in the state.

He said some thugs had been hired to pose like members of the group with printed fake Biafra flags and IPOB uniforms during the election period.

The spokesperson alleged that the hired persons had been given automatic rifles and guns to carry out attacks on people to justify the Nigerian government’s claims that IPOB was a terrorist organisation.

See part of the statement by IPOB below:

“Biafrans must be at alert because corrupt politicians in the South-East working in tandem with the civilian killing Nigerian military will stop at nothing until they carry out of their devilish plans to implicate IPOB.

“They have mobilised vehicles, printed fake Biafra flags and IPOB uniforms; they have acquired automatic rifles and guns for this dangerous crime against our people during the election period. Biafrans are therefore required to observe a curfew from 5pm 17 November to 5pm November 18, 2017.

“Anybody found outside within this period will be killed by these thugs and men of the Nigerian Army. Every Biafran, especially those in Anambra and neighbouring states must not venture into Anambra State either on foot or aboard any vehicle.

“The evil plotters promised to give out the sum of N20,000 each to those who volunteer to kill their fellow humans in Biafraland particularly those who would be travelling to or coming out of Anambra State during the election period between 17th and 18th November. As a responsible people oriented mass movement, we are worried about this cruel plan to massacre innocent people once again in Biafraland.

“We are advising every Biafran to stay in their homes and not venture outside from sunset on the 17 of November to sunset on the 18th. The Nigerian Army, Police, Navy and Civil Defence Corps are coming to Anambra State to kill as they did in Abia and Rivers during their illegal and murderous Operation Python Dance II. If you don’t come out, they will not kill you. Stay safe, stay indoors,” Comrade Powerful explained.”

Meanwhile, the Biafra Nations Youth League (BNYL) has stated that referendum activities would begin in the southeast, on Monday, November 6.

According to reports, the development was made public in a statement released by the group’s leader, Princewill Obuka, on Wednesday, October 18.

PLUSMILA.com gathers that Obuja stressed that the group was committed to ensuring the actualization of Biafra. He disclosed that the date, November 6, was chosen for the commencement of referendum activities as it marked the anniversary of the death of Philip Effiong, who signed the document signaling the Biafran surrender at the end of the Civil War.

If you arrest me, Biafra will come even quicker than we anticipate – Nnamdi Kanu