Big Brother Naija housemates, Cee-C has channeled her inner TBoss in hersel, and has declared that the prize win, means nothing to her, as she can make the money in one week.

Cee-C was conversing with her fellow housemate, BamBam at the head of house suite, when she made the statment.

“Money is not important to me. If today, tomorrow I leave this place, and I don’t walk away with the 45 million… I know I’d make more than that… What is 45 million? I swear to God, I’d make that money in a week..” Cee-C categorically stated.

Watch the video below; 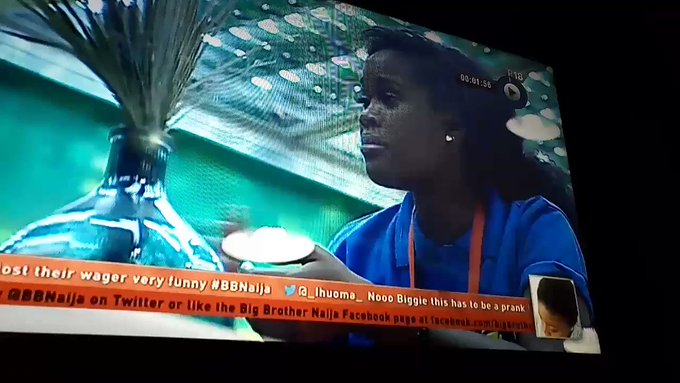 #bbnaija Ceec can make over #45m in a week….don’t know what she is looking for in bbnaija. Help retweet.

The housemates today, lost their wager for the second time in a row.. and biggie subtly told them, that they are “not entertaining the viewers”.

It should be recalled that Some Nigerians condemned the Big Brother Naija (BBN) show saying that the housemates aren’t entertaining the viewers.

Some of the viewers of the programme told newsmen that the show was “an insult to their intelligence as it promotes immorality among contestants.”

“A balance should be created between fun and depth.” They, while comparing the 2018 show with the 2017 edition with the theme ” See Gobe”, said that the 2018 show had not been entertaining enough.

This is the second week the show kicked off and many Nigerians had said that it was not entertaining enough.

Cassandra Smith, a banker, said that the housemates were not serious and it appeared that they were more interested in catching some fun in the house than winning the whopping prize money of N45 million.

She said they looked unambitious and were attending to issues nonchalantly referring to when the housemates lost their wager in their first week in the house. “The housemates are not serious, they are there to entertain us, and they are not doing anything serious that compared to the housemates from the 2017 edition. “They should be made to sit up and entertain the viewers because that is the essence of the show,” she said.

How To Participate In 2018 Big Brother Naija

Mel B steps out with her daughters amid divorce drama