There is an ongoing military coup in Gabon, as soldiers in the west African country who claimed they are out “to restore democracy”, took control of the national radio station in the early hours of Monday.

Juniors officers say they have seized power in oil-rich Gabon, where the ailing leader’s family has ruled for 50 years. 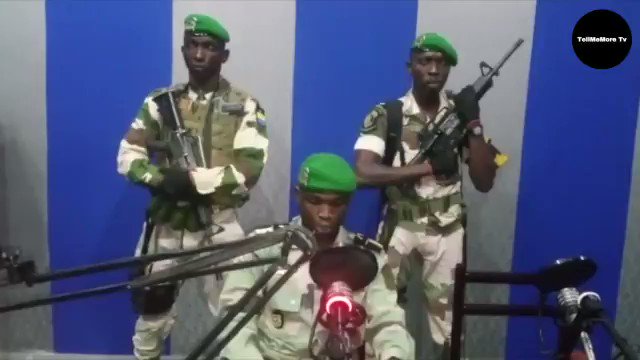 Military coup underway as Army in Gabon take control of capital Libreville & call the creation of a council to restore democracy adding that they question President Bongo’s ability to continue.
He has been out of the country since October& is recovering from illness in Morocco

Tanks and armed vehicles can be seen on the streets of the capital Libreville.

In its statement on Monday, the military officers condemned President Ali Bongo who addressed his compatriots last Monday from Morocco for the first time since suffering a stroke in October. They described the message as “a pitiful sight” and a “relentless attempt to cling onto power.”

Ali Bongo succeeded his father Omar Bongo as president in 2009. He narrowly won re-election in 2016 in a poll marred by violence and accusations of fraud.

Mr Bongo, who has been out of the country for two months, reportedly suffered a stroke in October and received treatment in Morocco.

‘Godzilla’ actor, Haruo Nakajima dies at 88 after battle with pneumonia

Australian Senator becomes the first politician to Breastfeed in the Parliament